Popular culture reinforces and shapes the beliefs and values of the individual, the community, and the masses. It can also transmit hidden messages about aspects of human behavior that are reiterated in scholarly research. In the field of education, particularly in world language teacher education, film and television can be used as an effective tool for examining how we acquire a second language. Using a symbolic convergence theory perspective (SCT) (Bormann, 1972), I employ Sellnow’s (2014) three-step process for the rhetorical analyses of mediated popular culture texts to reveal “covert messages” (p. 9) within the popular American Movie Channel (AMC) television series, Fear the Walking Dead (FTWD). These messages inform how second language and culture acquisition develop and serve as life-saving resources in extreme cases of cultural and linguistic isolation. In Season 1 of FTWD, Nicholas “Nick” Clark, embarks on an unintentional language and cultural immersion trip to Mexico. His experience reflects research on second language and culture acquisition, reinforcing the understanding that languages can be learned rapidly when it is a matter of survival. My analysis will show that while language learning can transpire through a formally-structured classroom experience, it can also transpire informally—through a Vygotskian (1978), sociocultural, “survivalist” language and culture learning experience—as reflected in FTWD. Applying Sellnow’s process and Bormann’s perspective can help teacher educators and their students find deeper meaning through new and engaging popular culture texts.

Sharon M. Nuruddin earned her BA in Spanish and Sociology from Villanova University and her MA in Translation from the University of Puerto Rico, with a focus on literary translation. Prior to pursuing her doctoral degree at The University of Georgia, she was a Spanish instructor at a university in Atlanta, Georgia. That experience sparked a desire to become a K-12 world language teacher educator determined to support pre-service teachers in their efforts to serve a new generation of bilingual students. As an emerging researcher, she fuses literary, literacy, and sociocultural theories to promote world language education in marginalized communities, and is interested in the intersections of SLA and popular culture. She is also a student of arts-based research methods and has published poetry and participated in poetry events with professors and fellow students. In addition to Dialogue, her work will soon be featured in an upcoming issue of Intersections: Critical Issues in Education.

Nuruddin, Sharon M. “‘No te voy a dejar nunca’ – Culture and Second Language Acquisition for Survival in Fear the Walking Dead.” Dialogue: The Interdisciplinary Journal of Popular Culture and Pedagogy, vol 6, no. 3, 2019. http://journaldialogue.org/issues/v6-issue-3/no-te-voy-a-dejar-nunca-culture-and-second-language-acquisition-for-survival-in-fear-the-walking-dead/ 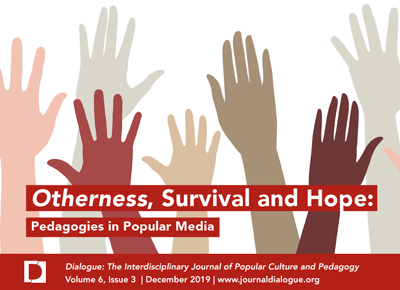 From the News to Zombies: Teaching and Learning about Otherness in Popular Culture
Anna CohenMiller

Section 1: Learning about Otherness within the Formal Education

“I am a Conversation”: Media Literacy, Queer Pedagogy, and Steven Universe in College Curriculum
Misty Thomas