We are happy to announce our latest issue, “Reinterpretation: Situating Culture from Pedagogy to Politics.” In this sixth year of Dialogue: The Interdisciplinary Journal of Popular Culture and Pedagogy, we have a set of five articles that speak to the range of popular culture studies. Across the articles, the topics showcase the varied ways in which we can reconsider and (re)interpret how we conceptualize culture.

First, Allison Rank discusses the interconnection between teaching and current political issues in  “Scarlett O’Hara, Solomon Northrup, and Ta-Nehisi Coates: Helping Students Grasp the Relationship between Popular Culture and Contemporary Racial Politics.” Jesse Weiner then draws a connection between historical and contemporary modes of poetry to address concepts of gender and sexuality in “‘Every Time I Write a Rhyme / These People Think It’s a Crime’: Persona Problems in Catullus and Eminem.” Our issue continues with Emily Hoffman’s “Making the Case for Teaching Character Change in Complex TV: The Closer and Major Crimes.” In this article, Hoffman describes how Jason Mittel’s 2015 book, Complex TV: The Poetics of Contemporary Television Storytelling can be applied in a semester-long undergraduate course to analyze “long-term, meaningful character growth.” Jason Tatlock’s article, “Human Sacrifice and Propaganda in Popular Discourse: More Than Morbid Curiosity,” describes a broad historical analysis of ethnocentrism, imperialism, and expense to “demonstrate(s) both the antiquity of such propagandistic goals and their relevancy to recent portrayals of human sacrifice in film.” The issue concludes with, Kathy Merlock Jackson and Terrance Lindvall, who detail the development of an interdisciplinary course on Silence. Through an examination of multiple popular culture media texts, in “Studying Silence,” Merlock Jackson and Lindvall highlight “characteristics of introversion and extraversion” while exploring the “role of silence in the modern world.”

In addition to the full-length articles, we are pleased to share three short online articles:

From the five articles to the short articles addressing pedagogy, books, and films, we hope you will see new avenues of understanding popular culture and pedagogy through reinterpreting and reconsidering culture through new lenses. We encourage you to dig deep into your thinking and practice and share your unique insights for a future issue. 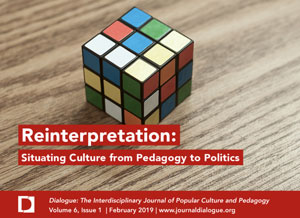