Quiet fills the concert hall. A young man, about 30 years old, stands in front of the audience. With him are a number of musicians in what appears to be a traditional ensemble, but with a few interesting and unusual changes. The young man is stylishly dressed, his clothes a mix of fashion and formality. His hair is a bit long and a little unruly, but this is the trend for young artists and musicians. The audience, mostly made up of 20-, 30-, and 40-somethings, do not seem to notice these small departures from tradition. They are simply eager to hear what this new composer has written.

The music is edgy and exciting. The composer pushes to the edge of convention, incorporates modern, popular music rhythms and instrumental techniques, and drives forward with youthful energy. The concert is a success, and the audience is eager for the next new work by this young man – this young man whose name is Ludwig van Beethoven. The year is 1800. 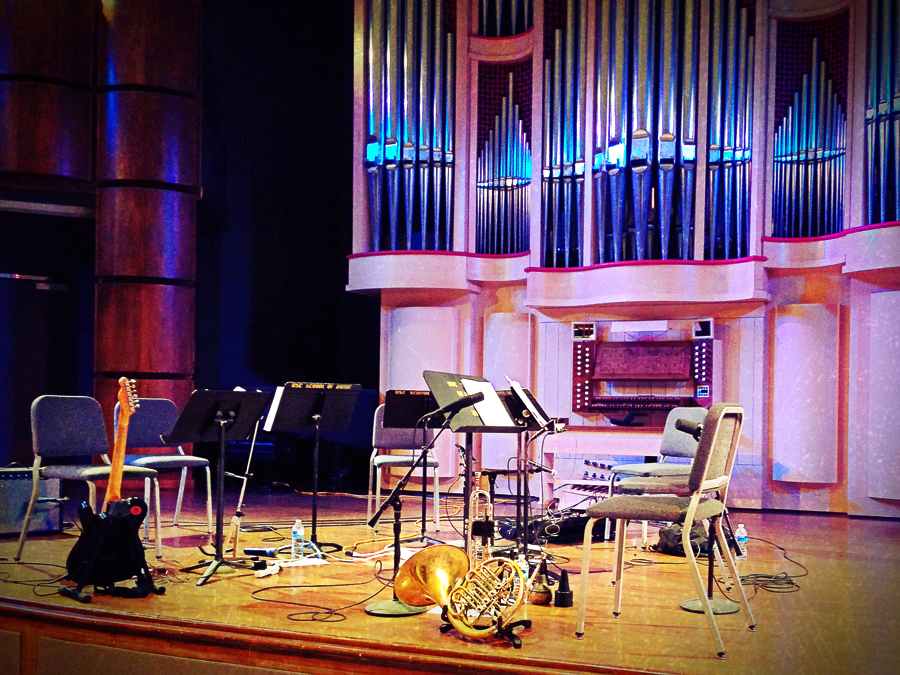 Just as we tend to forget that our parents were ever children, we also forget that the great masters of classical music were at one time on the cutting edge of innovation. They were as inspired by their contemporaries as their predecessors, and composers, even Beethoven, often borrowed ideas from the pop music of his time. Sadly, for obvious reasons Ludwig van Beethoven has not written anything new since 1827, and his music has become part of the old tradition. So, let us instead look to those living composers who are writing music for our time.

Familiar with the size of the University of South Carolina School of Music recital hall, and the typical “sold out” nature of this series, my friends and I arrive at the show thirty minutes before the doors open. We wait with the eager crowd of patrons who know that the concerts are typically standing-room-only. There is an air of restlessness until 7:00, and Director Michael Harley gives the thumbs up to begin letting people inside. We move quickly to claim our spots. A large number of seats are reserved for donors, but these are free concerts – no tickets necessary – so the rest of the hall is fair game.

Within minutes, the concert hall is filled to capacity. I glance around the room, and it appears to be a wonderfully diverse audience, covering a broad spectrum of age and background.

Set in an academic recital hall, complete with a pipe organ backdrop, there is the customary classical music atmosphere – a bit stiff with ceremonial undertones. Yet, the pale blue and orange lighting, the array of microphones and instrument pick-ups, and the electric guitar sitting next to the horn, suggest a very different concert ahead.

The lights dim, and yMusic walks out onto stage to waves of applause. Their clothes are trendy and tasteful – jeans and neckties, colorful dresses and collared shirts – nothing flashy, nothing boringly conventional. They appear more like an indie pop band than a concert hall ensemble, and this impression is quite fitting. I soon find in the program notes that the musicians have often, as a group or as individuals, backed and collaborated with bands such as The National, Bjork, Bon Iver, Dirty Projectors, Peter Gabriel, Paul Simon. . . and the list goes on and on.

There is a moment of silence as the musicians pick up their instruments and prepare to play.

The concert opens with Beautiful Mechanical, the title track from the group’s debut album released in 2011. Written by composer Ryan Lott – perhaps better known by his alt hip-hop name Son Lux – the piece is first on the album as well as the first piece ever written specifically for this ensemble, so it seems a good place to begin.

Having never seen yMusic live, my knowledge of the piece has been restricted to that studio recording, one which, to my great delight, does not do full justice to the wonderful blend of colors, rhythms, and structures that are evident in the performance.

Lott’s piece opens with an energetic solo cello line that sets the stage for the edgy, rhythmic piece ahead. The ensemble’s usual cellist, Clarice Jensen, was unable to make this show, but in her place is the young, but overwhelmingly accomplished, Gabriel Cabezas. Cabezas launches into the work with intensity and passion, driving the pace from the start. His tempo is noticeably faster than the studio recording, but his playing is precise, exact, and clear.

Nadia Sirota, viola, flashes a grin at Hideaki Aomori, clarinet, just before his entrance, as if to say, “here we go!” Aomori effortlessly joins Cabezas, matching his speed and intensity, and one by one, the rest of the ensemble stacks on top of the aggressive cello line and staccato clarinet. The piece grows and flows with practiced ease, albeit appreciably faster than the album version. Now, every time I listen to the album, I’ll think of this charming interplay between the musicians.

yMusic is a curious blend of timbres, mixing a violin, viola, and cello with a bass clarinet, flute, and trumpet/horn. One might think that the wind/brass would overpower the stringed instruments, yet with delicate precision and powerful playing, the ensemble finds an excellent balance.

There is a modicum of amplification that may be contributing to the excellent balance. Yet, recording engineer Jeff Francis does such an artful job that the result is wonderfully subtle.

Rob Moose, violin/guitar, introduces a newer work that has not been in the studio yet. Andrew Norman’s Music in Circles begins with the lightest wisp of the bowhair on the viola, playing thin, very high notes. The violin makes soft, crunchy glissandi. There is a rapid explosion of noise from the instruments, and then a return to the scratchy sound effects. The winds begin to blow pitchless air though their instruments.

Chairs are squeaking, paper programs are rustling, and there are more than a few coughs. The audience is audibly uneasy. Unfortunately, there is a stigma about extended techniques these days, and it appears that many here at the concert are not fans.

The bow begins to bounce across the strings of the viola, and suddenly there is harmony. Then, a scant progression appears. Gradually, each instrumental line grows from nothing; they are like a breeze, then squeaking pitches, then tones, then melody. As the tempo increases and the intensity builds, the voices of the instruments seem to crash and collide with one another. The strings furiously hammer their instruments, and the winds crescendo in waves of sound. Distinct patterns and clear harmonies emerge, and the seemingly chaotic, stunningly beautiful music pushes onward.

Norman builds tension so perfectly in this work that I am literally on the edge of my seat.

A clear melodic passage develops. CJ Camerieri, trumpet/horn, plays both an upward leading line and a downward leading line, alternating from one to the other in expanding intervals. The flute, played by Alex Sopp, echoes the trumpet. This would-be canon is broken by rhythmic differences that wonderfully disrupt expectations. Each of the instruments take up the material, while at the same time getting softer and softer until again we are left with the solo viola.

The viola continues, upward and downward, alternating, thinning, slowing, and fading away until the last note – an exact quotation of the first. In stark contrast to the opening of the piece, the audience is completely silent and perfectly still for the last few minutes of the piece. We are thoroughly captivated, mesmerized by the music, and breathless from the intense energy of the work. Applause, when it comes, is abundant and genuine. This is the highlight of the concert: a gorgeous, electric, and powerful piece.

Then, the lights dim further and a warm blue light is cast across the stage. The band begins to play Jeremy Turner’s The Bear and The Squirrel, a warm and inviting piece, lush with traditional harmonies and a lovely compliment to the previous three works.

Throughout the evening, it is difficult to distinguish the classical traditions from the modern pop, indie rock, alt hip-hop influences. Two fascinating and colorful works, Year of the Horse and Year of the Dragon, originally by electronica singer-songwriter Sufjan Stevens and arranged by Rob Moose and Nico Muhly respectively, illustrate the ease by which these extraordinary musicians incorporate both worlds.

Judd Greenstein’s piece, Clearing, Dawn, Dance is an extraordinary work of art. With a pervasive sense of perpetual motion, the lively rhythmic exchanges between the six instruments create compelling melodic lines and delightful harmonies. Then there is Marcos Balter’s mysterious and hauntingly beautiful work, Bladed Stance, which saturates the sounds of the instruments (and a few performers whistling) with copious amounts of added reverb. Though this music is born from classical traditions and is not rejecting its heritage, it has grown into something new – something that challenges the conventional “classical music” label.   This New Music is less about genre-bending and more genre-blending.  Every piece reminds me: music in the concert hall can be alive, connected, current, and thriving.

UPDATE:  New Amsterdam Records released yMusic’s album, Balance Problems on Sept. 30, 2014.  The record features several of the works from the March concert including Music in Circles by Andrew Norman, The Bear and The Squirrel by Jeremy Turner, and Bladed Stance by Marcos Balter.  This link also includes audio and video excerpts from Music in Circles.

Peter B. Kay is a composer, performer, and scholar from the upstate of South Carolina.  He received his DMA in Music Composition from the University of South Carolina.  His compositional style is eclectic, both familiar and new, and includes everything from atonality to minimalism, neoclassicism to blues, and folk music to pop.  He is currently the Artistic Director / Curator of Treefalls, a New Music chamber concert series in Spartanburg, SC.  His Publications include, “Music and Humor: What’s So Funny?” (2006) and “Musical Humor and Beethoven’s Symphonic Scherzi” (2013).

A Field Guide to Teaching Agency and Ethics: The West Wing and American Foreign Policy
Kayce Mobley and Sarah Fisher

Survivor Skills: Why I Want to Teach Reality TV
May Friedman

Girls, Guns, and Zombies: Five Dimensions of Teaching and Learning in The Walking Dead
Anthony Neely

"Can you imagine, a real, live Indian right here in Walnut Grove?": American Indians in Television Adaptations of Little House on the Prairie
Amy S. Fatzinger

Learning about People, Places and Spaces of the World through Informal Pedagogy: Socio-(inter)cultural Constructions and Communication within Popular Culture
Shelbee R. Nguyen

Applications in the Classroom: Hardly Elementary—Frontiers for Freshman Composition with Conan Doyle's A Study in Scarlet
Kate M. Donley