Frank Baum created the Wizard of Oz, and the grandiose man who lived behind a curtain. Perceived as holding immense power, the façade proved different than the reality. But what exactly is the reality? Daily, what are we as viewers, as students, as teachers, learning from popular culture sources around us? Trying to reach for a reality can be problematic in of itself, yet denying their existence is also a trap. The four articles in this issue bring together varied popular media outlets to uncover violence, gender, and powerful pedagogy in and out of the classroom.

First, Becca Cragin explains in her article, “Grounded Aesthetics: Pedagogy for a Post-Truth Era,” how students are often challenged in untangling the variety and substance of information streaming into their lives. Many students feel overwhelmed with the information, the discussion of fake news, and tend to believe there is no way to determine veracity. To address these concerns, Cragin provides pertinent sources and applications of literary and critical media literacy which have led her students to see beyond the concept of  life in a “post-truth era.”

Thus, what we see is the impact of popular TV shows, whether in desensitizing people to violence, to presenting varied cultural values, or to suggesting appropriate gendered presentations and behaviors. Just as Cragin evidences steps to expand student thought, Elizabeth Gartley provides insight into guiding middle and high school students to see different perspectives through considering The Walking Dead and the proposing the question “who would be on your zombie apocalypse team?” To ground this discussion, the article, “We All Have Jobs Here: Multiple Intelligences in The Walking Dead,”creates a connection between the characters on the show and Howard Garner’s multiple intelligences. What becomes evident in this article is the practicality of drawing popular culture into pedagogical practice to support learning. Through Gartley’s article, as readers, we are shown glimpses of the ways violence and gender intersect in media representations.

These media representations present a key outlet for informal learning—learning that can take place in ones living room instead of in a traditional classroom. The ways then we understand what we watch can be viewed in many ways, such as seen in, Allen Culpepper’s, “A Gendered Perspective on Policing Violence in Happy Valley and Fargo.” Culpepper unpacks the crimes and argues for a deep parallel between the on-screen portrayal of women in the TV series, Happy Valley and the film, Fargo. He also suggests a reflection to contemporary thought and political views, hinting at important gendered perspectives affecting (in)formal learning.

Lastly, Adam Nicks moves us to considering the media consumption of live action events, in particular that of professional wrestling in “The Many Faces of Foley: A Journey of Discovery and Influence on Professional Wrestling.” He examines the ways in which Mick Foley, a key professional wrestler from the 1990s, developed intricate personas which merged a real and “fake” world. Drawing from Foley’s autobiography, Nicks emphasizes the uniqueness of the wrestler’s “blurring of the lines between reality and fiction” while addressing concepts of gender and violence that affected audiences and professional wrestling in general.

These articles as a whole highlight the need to continue to explore and examine what is opinion and what is truth. Collectively, these articles address the persistent need to look behind the curtain and understand further. In some contexts, this plays out in representations and behaviors and others as fiction and reality. The authors here have pressed us to think differently about the influence and potential of media texts and portrayals, from TV, film, to literature and dramatic endeavors.

Finally, the vision and work to develop an issue depends upon the work of a strong team. In particular for this issue, I would like to thank Kelli Bippert (Educational Resources Editor) who provided extra assistance in finalizing this issue, Rob Galin (Copy Editor), Kurt Depner (Managing Editor), Douglas CohenMiller (Creative Director), and our peer reviewers. Moving forward, we are excited to see your contributions, encouraging you to submit for both journal articles and also critical perspectives and practices relating to pedagogy and/or popular culture. We hope you enjoy this issue and are encouraged to consider how popular culture presents both opportunities for formal pedagogy while also demonstrating inevitable dynamic effects for informal learning.

Portrayal of a police officer determined to fight crime and execute justice in a harsh, isolated environment has become a television and film subgenre, often featuring women facing gender-related challenges. The issues raised in Sally Wainwright’s British television series Happy Valley, can be made more accessible, particularly to American undergraduate students, via its commonalities with the Coen brothers film Fargo. In both, a tough but compassionate policewoman pursues the more sociopathic of a pair of criminals involved in a botched kidnapping attempt instigated by an inept businessman, taking on the case for personal and professional honor, and as a responsibility to family and community. Catherine in Happy Valley and Marge in Fargo juggle “masculine” and “feminine” roles as they care for family members while policing violence.  The women generally succeed in balancing their gender roles, whereas the men around them do not. But they sometimes assume the aggression associated with the male criminals they pursue. Happy Valley takes these issues deeper by giving Catherine a more intimate connection with one of the perpetrators and presenting the story more directly through a woman’s extra-patriarchal perspective, thus revealing the performative nature of gender roles and the limits of a patriarchal binary view of them. Looking at these issues in relation to Fargo paves the way for examination of their more complex and extensive treatment in Happy Valley.

T. Allen Culpepper is an associate professor of English at Tulsa Community College in Oklahoma, where he teaches literature, composition, and creative writing.  He holds a Ph.D. from the University of Tulsa, with a primary specialization in 20th-century British literature. He has a longstanding interest in the interplay between literature and popular culture. He is also a poet, and he currently serves as faculty managing editor of the online literary and arts magazine Tulsa Review, and as a reader for Whale Road Review and Nimrod.

APA
Culpepper, T. A. (2018). A gendered perspective on policing violence in Happy Valley and Fargo. Dialogue: The Interdisciplinary Journal of Popular Culture and Pedagogy. 5(3). http://journaldialogue.org/issues/v5-issue-3/a-gendered-perspective-on-policing-violence-in-happy-valley-and-fargo/

Though the academic community often looks down on professional wrestling, there are examples in which the medium allows for elaborate and complex storytelling rivaling other forms of literature. During the 1990s, due to the constant blurring of the lines between reality and fiction within the world of wrestling and the increasingly intelligent audience that consumed the product, performers were forced to adapt to a more realistic style integrating their actual life events and personality into their on-screen personas. One sports entertainer of note was Mick Foley, who crafted three splintered characters he portrayed amongst numerous promotions. Each had their own trajectory and were representative of separate aspects of his own psyche. Cactus Jack was a brutally violent version of Foley hungry to succeed by any means necessary, Mankind was a Gothic personification of Foley’s insecurities, and Dude Love was an out-of-date projection of an adolescent Foley’s ideal, confident hero. Throughout Foley’s career he pioneered a new style of sports entertainment, set a new precedent for character development, and redefined physical expectations for what a performer could be. Mick Foley has since gone on to become a New York Times bestselling author, an advocate for the charity RAINN, a spoken word performer, and a Santa Claus portrayer.

APA
Nicks, A. M. (2018). The many faces of Foley: A journey of discovery and influence on professional wrestling. Dialogue: The Interdisciplinary Journal of Popular Culture and Pedagogy. 5(3). http://journaldialogue.org/issues/v5-issue-3/the-many-faces-of-foley-a-journey-of-discovery-and-influence-on-professional-wrestling/

MLA
Nicks, Adam Michael. The Many Faces of Foley: A Journey of Discovery and Influence on Professional Wrestling. Dialogue: The Interdisciplinary Journal of Popular Culture and Pedagogy. 2018, vol. 5, no. 3. http://journaldialogue.org/issues/v5-issue-3/the-many-faces-of-foley-a-journey-of-discovery-and-influence-on-professional-wrestling/

With the rise of cultural studies, positivism and formalism fell out of favor. But in recent years, altered versions of these methodologies have been suggested as solutions to the deficiencies of the ideological approach dominating the field. Where the ideological approach looks at the content of texts to determine their meaning, the aesthetic approach adopted by media scholars in recent years returns to the close textual readings of formalism (while abandoning its assertion that meaning resides in the text alone). Similarly, where the ideological approach tends to use textual analysis devoid of sociological empiricism, the use of “big data” in the humanities enhances interpretation by using empirical data alongside it (while rejecting positivism’s assumption that measurable data alone is probative). This article draws both methodological strands together to propose an approach to media interpretation called “grounded aesthetics.” Grounded aesthetics involves correlating sociological data with close textual reading to argue for the likely social meaning of the text, given the techniques it uses and the social reality around it. Examples of classroom activities are used to show how the approach can address the “post-truth” perspective many students share: that analyses of representation are interchangeable opinions. Grounded aesthetics greatly improves students’ ability to create well-supported textual analyses and to evaluate the persuasiveness of others’ arguments. It also models critical thinking skills that are useful for dismantling attacks on reality in the “fake news” era, especially those that dismiss analyses of inequality as ideology.

Becca Cragin is an Associate Professor of Popular Culture in the School of Cultural and Critical Studies at Bowling Green State University. Her research interests include gender, race, and sexuality in television and film, in comedy and crime genres.

APA
Cragin, B. (2018). Grounded Aesthetics: Pedagogy for a Post-Truth Era. Dialogue: The Interdisciplinary Journal of Popular Culture and Pedagogy. 5(3) http://journaldialogue.org/issues/v5-issue-3/grounded-aesthetics-pedagogy-for-a-post-truth-era/

A model can be useful when engaging secondary students in team-building by appreciating differing skills and identifying their own strengths. In this example, a model was provided that students to indulge in the transgression of popular culture and zombie media. Middle and high school students participated in a critical thinking and team-building unit which capitalized on student interest in zombie popular culture, particularly the AMC series The Walking Dead. Students engaged in cooperative activities with a “zombie apocalypse” theme. Activities included identifying roles for team members based on individual skill sets in order to strengthen to group as a whole. This approach allowed students to approach this unit as assembling a “zombie apocalypse team,” an idea borrowed from popular culture. The popular culture “zombie apocalypse team” shows that survival depends on building a cooperative team of individuals with disparate but complementary skills and approaches to problem solving. Howard Gardner’s theory of multiple intelligences can provide theoretical framework to examine how the group of survivors in The Walking Dead combine multiple intelligences, as represented by individual characters, to survive. This model can provide a more detailed context to allow students to their own strengths within a team.

Elizabeth Gartley is a certified teacher librarian with a background in media studies. Her research interests include language and literacies in comics, critical media literacy and pedagogy, cross-cultural approaches to media studies.

APA
Gartley, E. (2018). We All Have Jobs Here: Teaching and Learning with Multiple Intelligences in The Walking Dead. Dialogue: The Interdisciplinary Journal of Popular Culture and Pedagogy. 5(3) http://journaldialogue.org/issues/v5-issue-3/we-all-have-jobs-here-teaching-and-learning-with-multiple-intelligences-in-the-walking-dead/

MLA
Gartley, Elizabeth. “We All Have Jobs Here: Teaching and Learning with Multiple Intelligences in The Walking Dead”. Dialogue: The Interdisciplinary Journal of Popular Culture and Pedagogy. 2018, vol. 5, no 3. http://journaldialogue.org/issues/v5-issue-3/we-all-have-jobs-here-teaching-and-learning-with-multiple-intelligences-in-the-walking-dead/ 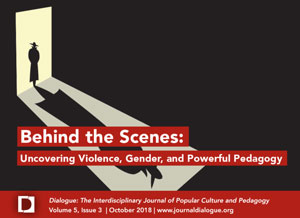